skip to main | skip to sidebar

The soul of RCRC Cambodia

Posted by Rose Charities at 1:14 PM No comments:

Su's lovely garden: A lesson for we all, not to mention urban planners

i was hunched down by a bed, making a patient drink ORS when Deska, our driver, came up and tapped me frantically on the shoulder. he tells me in French (most people here speak creole) that there is an emergency. i follow him to the other ward and find a teenage boy lying half-naked on one of the cholera beds. i think to myself that he must be mortified to be lying there, so exposed, his naked buttocks hanging over the hole cut in the cot so his diarrhea will simply fall into the bucket placed below his bed. as i get closer i start to see that he's not mortified because he's barely conscious. his eyes have sunken into his head and the skin on his face is pulled taut over his now-prominent cheekbones. i rush over and feel for a pulse in his right wrist. it's not there and his hand is cool. i grab his other wrist and there's still no pulse. i tell deska to run for one of the doctors and he goes. i feel the boy's neck and i can't feel his carotid pulse. i know he's alive because his breathing is fast and furious. i ask one of the nurses for a stethoscope and she tells me there are none. i ask her to start an IV in one arm and i'll start one in the other. she gets to work and can't find a vein- he's severely dehydrated. another nurse comes in and i ask her where the doctor is. she shrugs. I tell her to start the next IV and i go run for a doctor who i'm hoping, at the very least, will have a stethoscope and, at the most, will be better at starting IVs on severely dehydrated patients than we are. i find Kanako and she goes to find one of the elusive doctors while i go back to check on the boy. his breathing is slowing down. his brother, who has clearly been told in my absence that ORS is the key to survival, is trying to pour ORS down his throat. i want to tell him to stop because the boy is barely unconscious and can't swallow, but i also know that it's too late for this boy and i think the brother needs to feel that he did something. i notice something white coming out of the boy's mouth and i look closer- white foam is bubbling out. it begins to pour out of his mouth and both nostrils. at first i wipe it away, but then i notice that he's not choking on it because he's no longer breathing. i sit back and just watch it flow out. the doctors arrive and one of them stands back and observes (he has a tendency to be less than inclined to touch cholera patients) while the other doctor does a few half-hearted chest compressions. we haven't been able to find a vein and there is nothing more to be done. it's over.

there is little time for compassion in a cholera outbreak. the "corpses" are highly contagious and need to be quickly cleaned with disinfectant and then put in a body-bag to be buried. i want to give the family time to grieve- they just lost a 19-year-old boy- but the families of the other patients want him gone immediately. someone runs for a body-bag. i pull the sheet over his face as people are gathering around to gawk. his mother is in shock and doesn't seem to believe that he's really gone. she goes over and pulls the sheet down. she touches his face. she pulls the sheet down further and touches his stomach. then she touches his feet, one at a time. i don't know what she's looking for it, but she doesn't find it. she sits down beside him and looks incredulous. I am about to be the only person in the room to cry so i step out onto the balcony and take deep breaths. i manage to pull it together.

Someone arrives with the bag and Kanako lays it out on the bed next to his. together we open it and his mother and brother take his arms and legs and lift him into it. Kanako and i reach in and take his hands and lay them on his chest. then we zip the bag closed, over his still open eyes. he doesn't look dead. he looks like even he can't believe that he's gone- that one day he was a normal teenage boy and the next day he died the most degrading death a human being can ever experience.

cholera is merciless. it robs you of any and all dignity you once had. untreated, you can lose up to 20 litres of fluid a day in the form of diarrhea and vomit. you will lose all of your strength and you will literally lie in a pile of your own diarrhea until you die. the management is simple. you need fluids. it's just that easy. cholera treatment centers (CTCs) are easy to set up. it just takes resources- people and supplies. it just takes someone actually caring.

why this STILL hasn't been properly implemented here, I have no idea.

I don't know why I have such a strong belief in justice. but i do. as a Christian, a Libra, a woman, a human being... I have this intrinsic belief in justice- that the world is just. or more realistically, that it can and should be just. in spite of all of the places i've been and the things i've seen that have shown me time and again that life is anything but just, i still believe it can be. and what's happening here isn't just.
Posted by Rose Charities at 11:02 AM No comments:

Word Love - just as wonderful as ever....

www.WordLoveWorldLove.com The Word Love magic continues... the idea is timeless..
Posted by Rose Charities at 11:56 PM No comments: 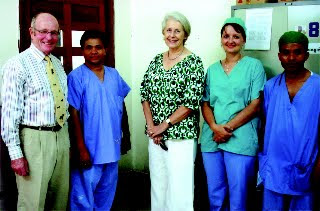 Mr Mike Webber (left of picture) of Rose Charities New Zealand has been awarded the 2009 Charity Rose Award. Over the last 8 years Mike has given copious amounts of professional time, not to mention funds and materials of his own to establish refraction services in Cambodia at the Rose Charities Clinic. Mike was also one of the pivotal persons in re-establishing the Clinic from its debilitated state after it was totally looted allegedly by an American expatriate in 2002. He has personally taught at the clinic, training local refractionists. He also helped establish the current main refraction course in Cambodia operated by other major ophthalmic NGO's. Mike has elicited donations of very valuable equipment, materials and supportive funds. Together with Dr David Sabiston  also of  great stature and importance to the Clinic Mikes work for Cambodian eye issues has been unparalleled. Mikes has worked the world over. Born in Kenya, he continues involvement with Fred Hollows Organization and NZ Aid in the South Pacific. Despite a very busy schedule in this area he took on assisting Rose purely out of the kindness of his heart. Two years ago Mike Webber was awarded NZ's highest civilian honour - the NZ, Order of Merit.

In the photo above, Mike is seen with Dr Hang Vora (CharityRose2006), Dame Silvia Cartwright, Natalia Vora, and Mr Bun (a refractionist trained by Mike) . Below is the Award Ceremony, at the Khmer Surin Restaurant at the Rose Charities 3rd Intl. Meeting on Saturday 26th June 2010 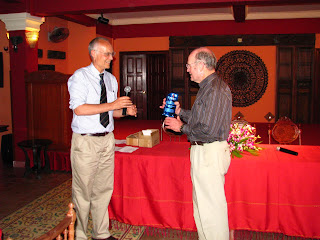 The Charity Rose Award is awarded once a year and only to one person. That year thus 'belongs' to the recipient, and is shared with no-one else. Recipients are carefully selected (within or outside of Rose Charities members) and vote made. It is thus the ultimate Rose Charities acknowledgment of the charity of the recipient. Mike is a deserving winner.

Posted by Rose Charities at 11:25 PM No comments:

Posted by Rose Charities at 10:58 AM No comments: 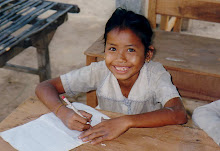 ..just a smile can change the world..

Rose Charities
Through innovative, self-sustaining projects and partnerships, Rose Charities supports communities to improve quality of life. We do this within a framework of volunteerism that places emphasis on results. By linking people and working together we all benefit. The Rose Charities international network of independent organizations are not-for-profit secular and non-political